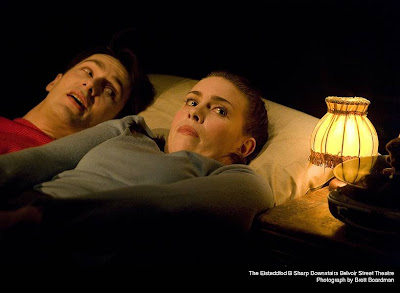 I originally saw this dizzyingly wonderful play by Lally Katz in its original run at North Fitzroy 's independent theatre The Storeroom in 2004. Now re-staged in the almost-as-intimate confines of the Malthouse Theatre's Tower Room, this new production uses the same set and generates the same unsettled sense of strange delight, thanks to the sure hand of director Chris Kohn.

Abalone (Luke Mullins) and his sister Gerture (Katherine Tonkin in the role originally played by Jessamy Dyer) were orphaned as a result of an tragic pruning accident. Their intimacy as children has carried over into the almost-adult life they share in the claustrophobic confines of the family home - reduced here to a single, cluttered room, wonderfully designed by Adam Gardnir - where their games have taken on a dark and unsettling edge.

To escape her brother's semi-incestuous attention, and her own flawed fantasies which picture her as the lover of a domineering thug; Gerture escapes at length into a fantasy world, a classroom, where she is the teacher. Abalone, frustrated as he is by his inability to control his sister, has nonetheless roped her into his plans to play Lady Macbeth to his Macbeth in the annual village eisteddfod (a general showcase of talent, or lack thereof), which he is desperate to win.

I'll make no bones here of my admiration for Katz, whose magic-realist approach to theatre makes her one of the most unique voices in Australian drama today. Her creative partnership with Kohn has led to some amazing work; such as The Black Swan of Trespass, about the tortured life of fictional poet Ern Malley. Here, Katz has constructed a beautifully realised, darkly comic gem of a play that explores love and longing, sibling rivalry and the nature of desire, in a manner that is utterly convincing despite its studied avoidance of staged naturalism and realism.

As Alison points out, "there is an anarchy" at the core of Katz's unpredictable narratives which ensures one's fascinated attention; for her plays shun predictable situations and outcomes, much as Gerture shuns her brother's clinging demands. The absurdity of the production perfectly counterpoints the tension and drama underlying Gerture and Abalone's relationship; the performances by Mullins and Tonkin are spot-on; and Kohn's direction is even more assured than in previous productions.

Without doubt, The Eisteddfod is one of the theatrical highlights of the year; it should not be missed.
Posted by richardwatts at 1:54 pm

Richard- I believe you may have mixed up the characters names - He is Abolone and she is Gerutre!